The latter part of 1967 brought film director Joe Massot to The Fool’s door once more. We had met him first in our St. Stephens Gardens studio where he had been impressed with the painted Wonderwall armoire. Joe was tall, dark and handsome with a sturdy physique, we had seen him and his lovely blond wife Claire on and off several times at their London apartment to attend a party or get together with one or other of his cool actor friends like James Coburn and Ben Carruthers, best known for their roles in “The Magnificent Seven” and “A High Wind in Jamaica”. 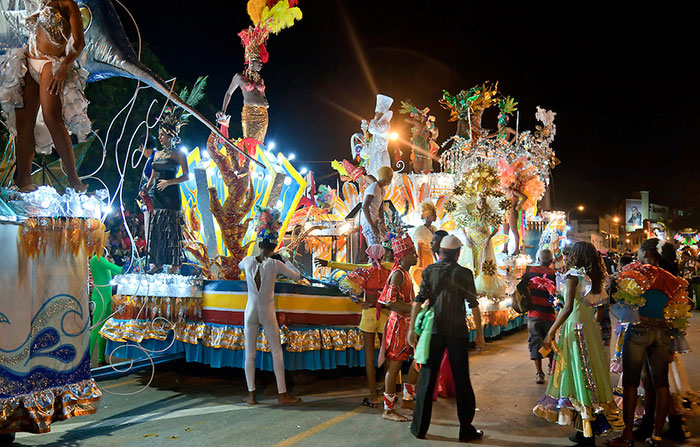 Joe had interesting tales to tell about his time on a CIA mission in Angola and the Congo during the period of Lumumba and Motubu and how through the Angolan connection in the early 60’s he started making films in Cuba for the Castro Government about the Havana Carnival celebrations with Guillermo Cabrera Infante, later the screen writer for the “Wonderwall” movie. Joe barely escaped Cuba on a Canadian cargo plane a few days before the revolution. 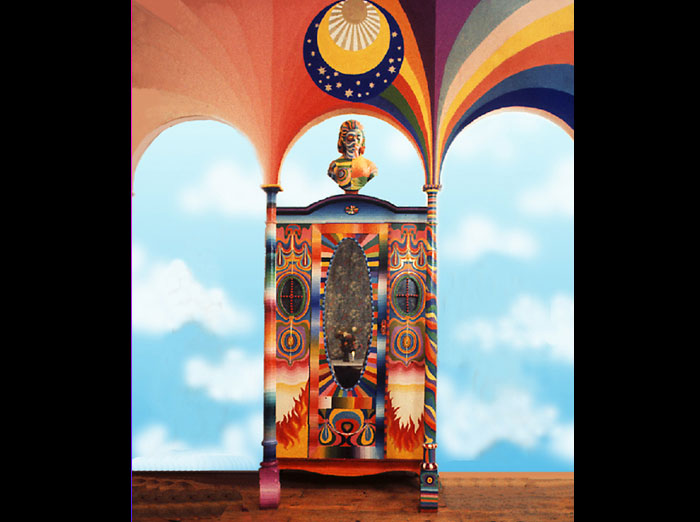 He informed us that he was working on the prospect of directing a new film, based on an original story by Gerard Brach, with producer Alan Clore and Andy Braunsberg as its executive producer. He told us he had been visually inspired by our painted armoire and he wanted to title the film “Wonderwall”, which was fine with us. I wonder if C. S. Lewis’s “The Lion, the Witch and the Wardrobe” played a role in his inspiration too. 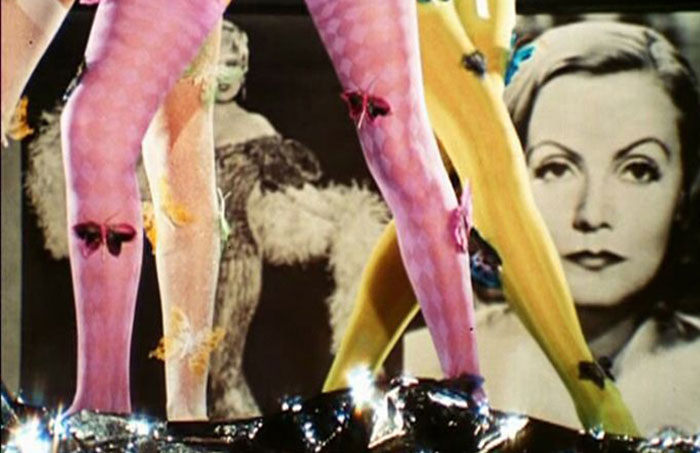 He envisioned the movie as a psychedelic extravaganza of the London 60’s scene and hired us for production designs, sets and costumes and to make an appearance in the film. 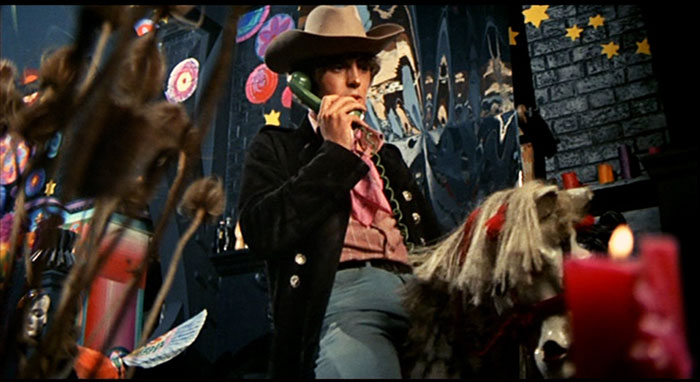 “Wonderwall” started out when Joe met actor Iain Quarrier, a colonial Canadian pretty boy who was cool and sharp, attracting all the pretty mod girls on the scene, the personification of Austin Powers, shallow, conceited and vain, who was about to play a part in Roman Polanski’s film “Cul de Sac”. Iain had introduced Joe to Gerard Bach, the writer of the original “Wonderwall” story, who was also the script writer for Polanski’s movie “Fearless Vampire Killers” with Sharon Tate. 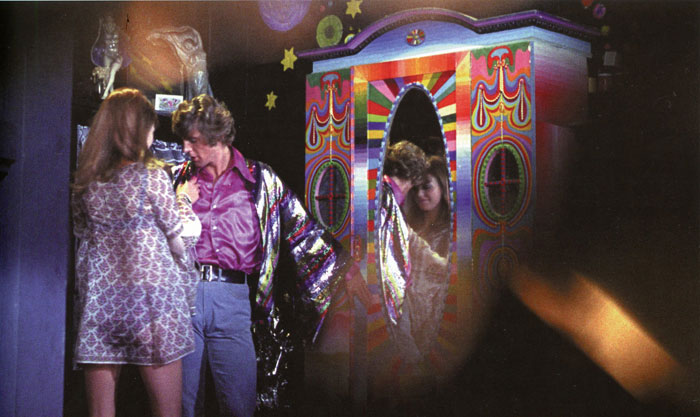 Jack MacGowran, who was to play the role of the biology professor was on board already, Joe met him on the production of “Fearless VampireKillers”. Sexy actress Jane Birkin, only 20 years old and married to John Barry at the time, agreed to play the starring role as wanna be model Penny Lane. 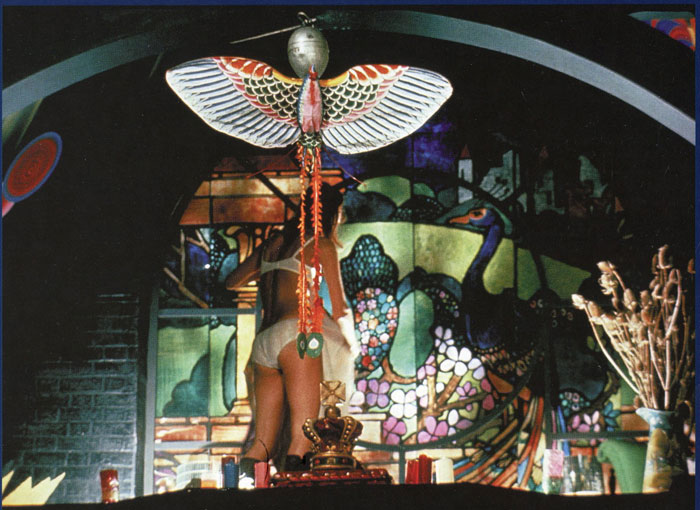 They would use the small soundstage at Twickenham Studios in London. The budget for the building of sets was minuscule and art director Assheton Gorton borrowed the sets he had designed for “the Bliss of Mrs. Blossom”, a Shirley MacLain picture. With a few major “the Fool” alterations it became Penny Lane’s flat. 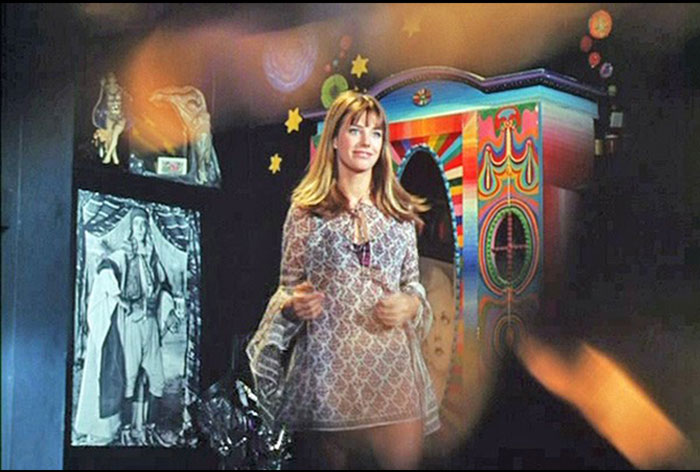 Joe was keen to have George Harrison do the music score and it was at the opening of the Apple boutique on December 7, ’67, by our invitation, that they first met. They talked together about George composing the music for “Wonderwall” and George was interested because it was an opportunity to have complete musical control and experiment with the Eastern musical influences he was studying and partial to. 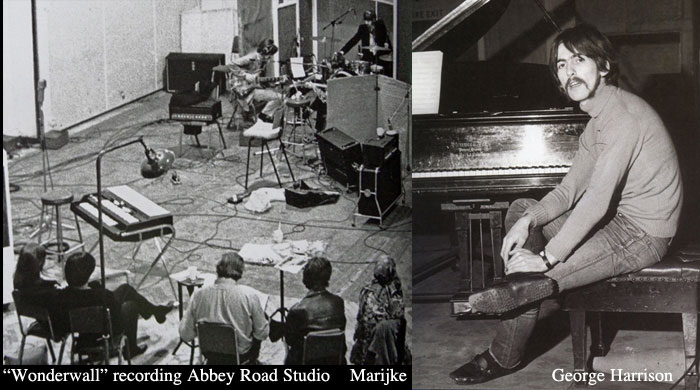 Thus, after follow-up meetings with Joe, Alan Clore and Apple, he agreed to participate and made arrangements with the EMI Abbey Road recording studio. Having worked with the Beatles before during their 1964 and 1967 tours, the Liverpool “The Remo Four” band were hired to collaborate on the recording of the sound track as studio musicians.

The Fool did make an appearance at the spaced out party scene, Simon playing his silver flute with Yosha and Barry plus the other party guests, mostly Chelsea acquaintances of Joe and Iain, on percussion. For this sequence we were delighted to record a five minute long track with George at Abbey Road studio for the overdub.

Joe asked me to do a mystical dance number to the music we had recorded with George. I suffer from a mild inferiority complex so that I considered the proposal with trepidation, but after some time I swallowed my angst and did it anyway but was not very happy with the result, because they only shot one take.

“Wonderwall” was a low budget film and George confided to Joe that he had spent £15,000 of his own money when he went over the budget, so he offered to sell the soundtrack to the producers for its original cost but they thought it was Indian music and therefore would not be commercial. So it happened that “Wonderwall” became the first album released by Apple Records and sold several million copies.

Beautiful sexy Jane was lovely and easy to work with, she liked the outfits and dresses Yosha and I created and wore them with panache. Iain Quarrier was a looker and a fun guy to be around, he got along great with Simon and Barry, horsing around between takes. To meet Irish actor Jack MacGowran who had the role of the lonely professor, best known for his work with Samuel Beckett and a number of John Ford’s films, was quite special, a great actor and I really liked and respected him. 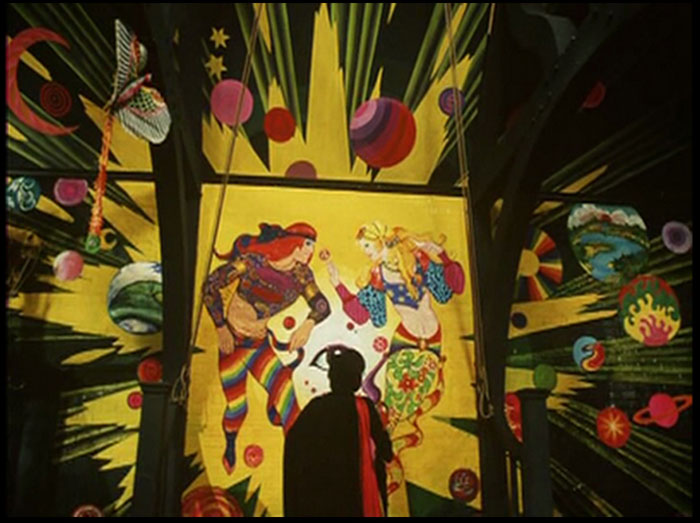 After I painted the design for the big backdrop mural of two lovers, it was enlarged and executed by studio painters because we were not members of the Set Designers Union. I also created several illustrated intermezzo cards, like they used in the silent movies, with texts such as “Are you in a Hole?” and “What the Girl doesn’t Know”… 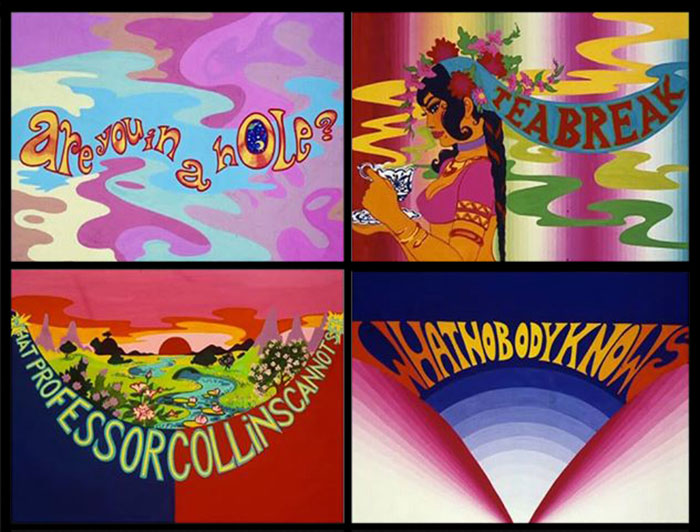 Since we were not members of the British Screen Actors or Set Painters Guilds, (due to our immigration status), Joe could only give us credit for our work by an insert at the start of the film reading “Introducing The Fool”. The “Wonderwall” movie was filmed at London’s “Twickenham Studios” and there the Wonderwall armoire still rests in peace in the morgue, I hope. 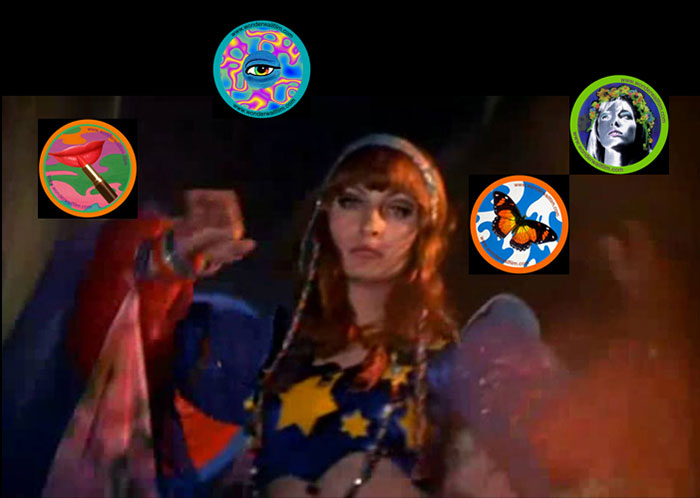 Joe claimed that the charm of the film’s look, besides the Fool’s contributions, is due to the sumptuous color and lighting of photographer Harry Waxman, who also showed Joe some neat camera tricks using effects from the silent film era. 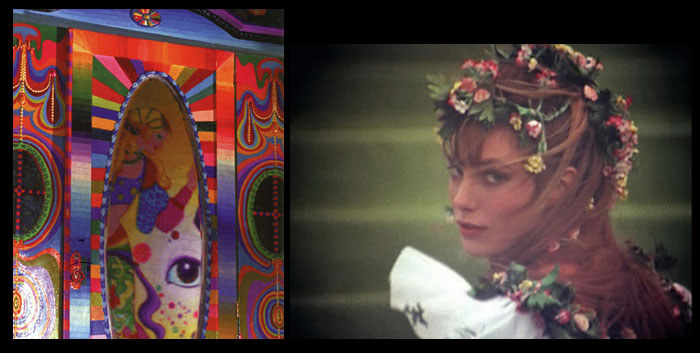 In retrospect the film was kind of sad, considering that the female star character was saved by the lonely professor from attempted suicide, due to an unrequited romance with the male star and it had a melancholy atmosphere in spite of some comical surrealistic sequences. It brought home contemplations of my own suicidal tendencies. 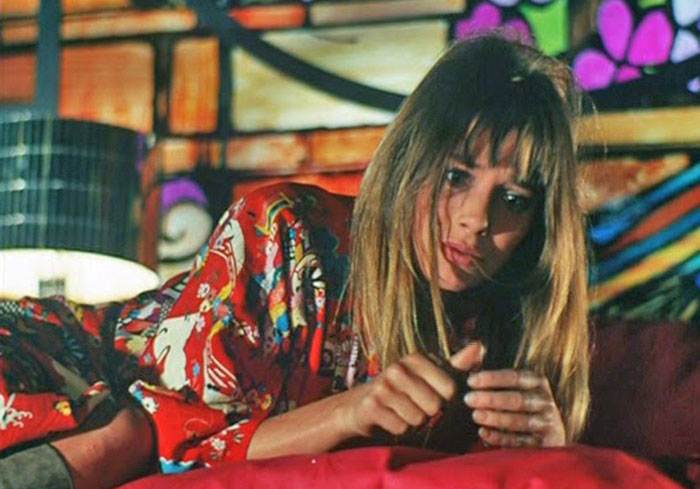 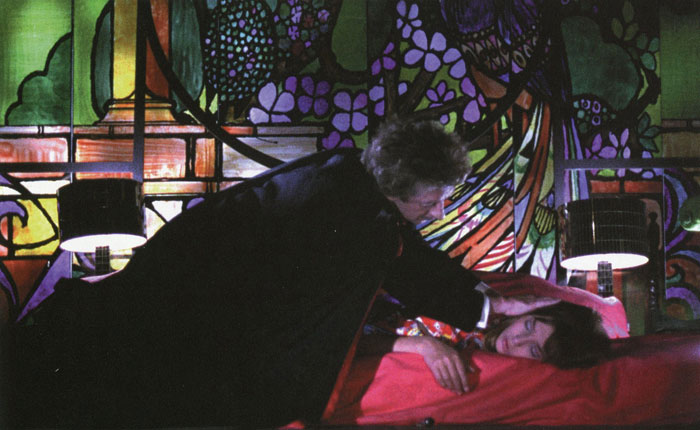 The voyeuristic hallucinogenic fantasy premiered at “Cannes Film Festival” on May 17, 1968, attended by Jane Birkin, George and Pattie Harrison, Ringo and Maureen Starsky, Iain Quarrier and Joe and Claire and their friends, by which time The Fool were already on their way to America.

During that summer Cass Elliott of “The Mamas and Papas” screened the film in Los Angeles for her manager Bobby Roberts, a well known Hollywood producer. According to Joe, he wanted to buy the rights for America but the negotiations fell apart on the slopes of Aspen and “Wonderwall” just disappeared. 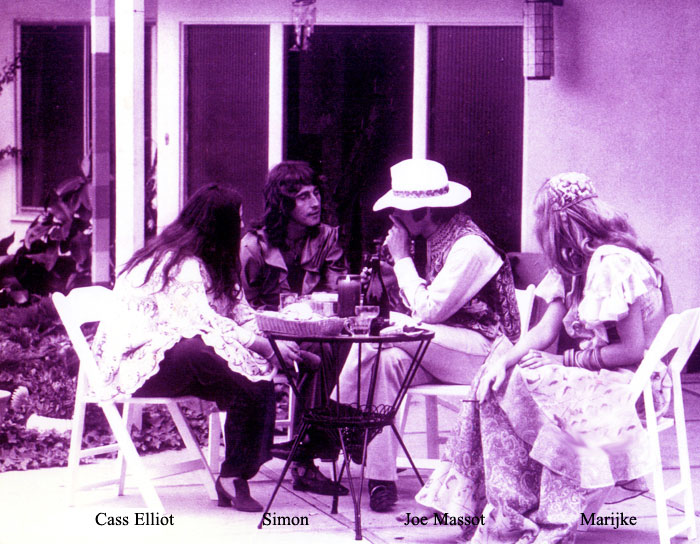 In 1998, living in Los Angeles, I was contacted by Joe once again because he wanted me to re-create the “Wonderwall” armoire in the form of a box for the re-release of the movie that year on Rhino Home Video, which I did with pleasure. 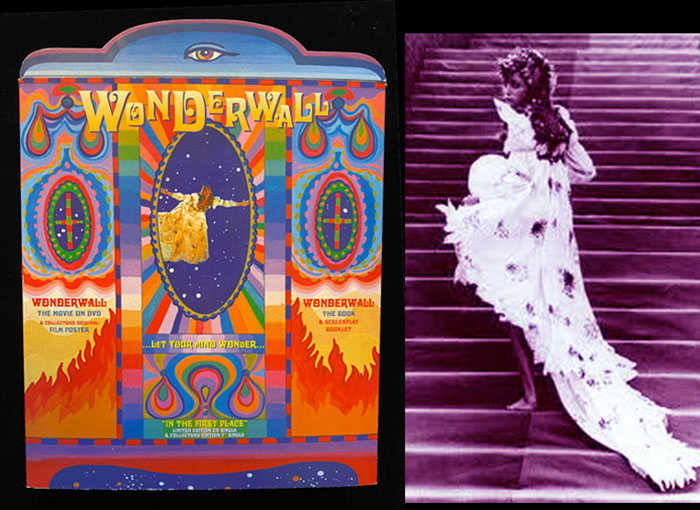 The box contains the re-edited movie on DVD with a re-mastered surround soundtrack, the script, the movie poster, transfer stickers, a word and picture book and a single CD called “In the First Place” performed by “The Remo Four”, produced by George Harrison, Plus a short rendition of the “Reflections on Love” film. The “Wonderwall” box is still occasionally available as a collectable on the internet.

To promote the re-release of the film, Joe rented the Egyptian Theater in Hollywood for the viewing and interviewed me on stage in front of the press. Angst time again for me, being tongue- tied as usual, but I got through it in one piece. However, it was really nice to work together for the second time. Joe was a talented, interesting and sweet guy, sadly, he passed away too soon in 2002. 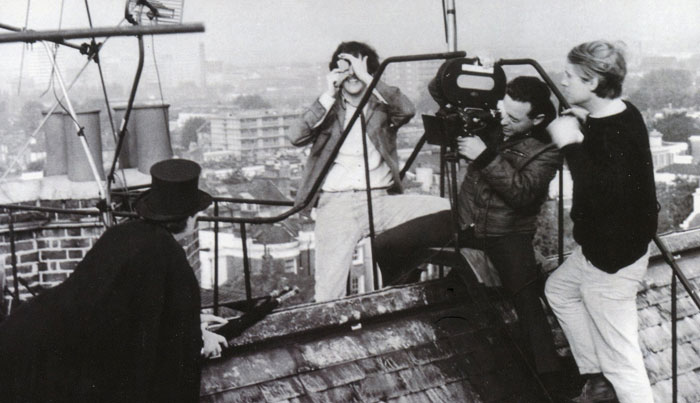 Joe Massot (1933-2002) was a writer and film director, a native New Yorker, educated at Virginia military academy and the American Academy of Dramatic Arts. He was best known for the film “Wonderwall” (1968) featuring the George Harrison soundtrack and the Led Zeppelin concert film “The Song Remains The Same” (1976). Other films by Joe Massot include the Ska film “Dance Craze”, “Space Riders”, “Zachariah”, “Eddie Grant Live at Notting Hill Festival” and the short film “Reflections on Love” (1965), which was nominated as the best short film at the “Cannes Film Festival”. 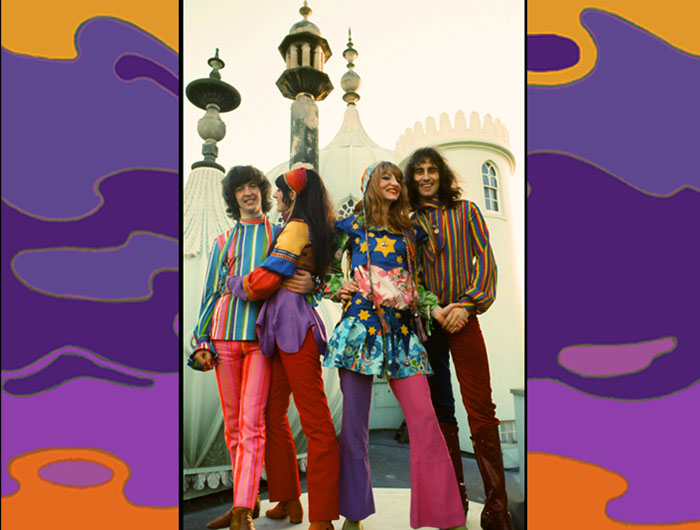 For The Fool our work on the “Wonderwall” movie was our parting shot in London, we were on the cusp of embarking on our next great adventure!